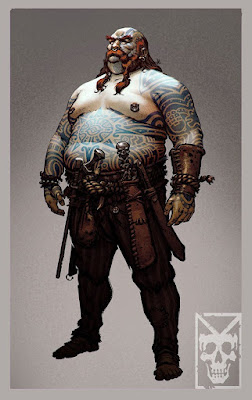 The next class up in the character creation challenge for Bhakashal is the Slayer. The Slayer was the first “custom” class I made for the setting. I wanted a hunter/tracker class of some kind, but I wanted to divorce it from any LOTR connections. My love for LOTR is boundless, but the Ranger is one of those classes that is specific to the setting, it wasn’t a good fit for Bhakashal.

What I did like was the idea of a class that was dedicated to fighting a particular kind of monster, “monster slayers” are a fixture of pulp fantasy, and a perfect fit for the vibe I am trying to create. The “aha” moment came when I decided to marry the Ranger and Assassin classes into something different. Assassins were a great concept, game mechanically at least, but the need to be evil and take on contracts for assassination was something that didn’t fit well with group based adventure play.

The slayer in Bhakashal is affiliated with a temple and a god, not with a Noble House, but they are still a martial class, with all the appropriate benefits. Unlike most martial classes however, they have specific abilities related to particular kinds of opponent. Slayers are specialists that focus on the destruction of one group of dangerous creatures. Today we will create a 3rd level slayer, perfect for a one shot adventure.

A. Choose a character class

B. Choose a Playable Group and Faction

All classes get a +1 bonus per 2 levels of experience, so +2 for a 3rd level slayer.

Initial number of weapons determined by class. Slayers start with 3 weapons and get an additional slot at 4th, so 3 to start.

There are two categories of foes, specific and general. A specific foe might be vampires, generic foes might be any undead. For this slayer I will choose the most common form of foe for slayers: animals. Animals were the first foe to be fought by any group of sentient beings, and regular hunters in the setting are all 1st level slayers that don’t advance.

So the general foe is animals, the specific foe in this case is giant animals/dinosaurs. Giant animals are fairly common in the game, as are animals in general, so this is the most common variety of slayer in the game.

+3 to hit/ +3 to damage against all giant animals/dinosaurs

Slaying: When attacking creatures of the target type, the slayer makes regular to-hit and damage rolls. However, on successful attacks, if the slayer exceeds their natural “to hit” by 5 they have the option to try for a slay, an instant kill, using the assassination table. If this fails, they do half regular damage. Opponents of more HD than the slayer’s level get a saving throw versus death.

Surprise: the Slayer has a 3 in 6 chance to surprise others and only a 1 in 6 chance of being surprised.

Disguise: Slayers get the disguise and spying abilities of the assassin

Languages: If the Slayer gets any extra languages because of high intelligence, one of those languages is that of the target creature; if the creature does not possess a language, the Slayer gains the ability to mimic its sounds or behaviors and communicate basic concepts (e.g. danger, food, etc.) We will retroactively remove one of the slayer’s languages here (say Togmu) and replace it. Since the general and specific foes here are not an individual creature (e.g. vampires), we will choose the latter option, e.g. the slayer is good at mimicking sounds of various animals.

For PCs and NPCs being made above 1st level, assign magic items as follows:

I permanent and two temporary items