Urban Adventuring - The Tale of Ujin Tohl the Viridescent part 3 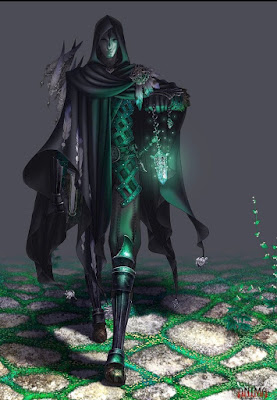 In this installment I realized I needed allies to complete my task, so I went in search of some...

Urban Adventuring - The Tale of Ujin Tohl the Viridescent - Part 2 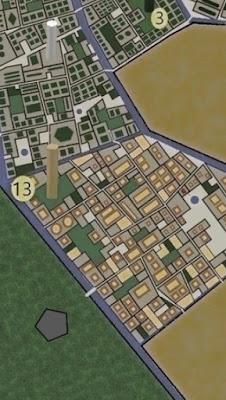 In the next installment Ujin cases his target. One on one gaming you can take your time and do things right...

Ujin rose early, the night before he had killed 6 men and a beast that would haunt his dreams for months.
He needed a cleansing.
When he went downstairs at the Tunkers Prince Inn it was already hot… it was always hot here. Ujin decided to leave his leather armor behind and rely on his cloak to protect him, the heat was just too much and was going to get worse as the day progressed.
The inn faced out on to a large city square, there was a statue in the middle of the square, dedicated to the voidnik that maintained the city canals. The statue had the head and torso of a four armed voidnik dwarf and the bottom half of an octopus. The voidnik half had a beard and hair of seaweed and held a hammer and an axe, a jug of water and a fish. The tentacles on the bottom half disappeared into the ground and reappeared around the square in various places ringed by pools and shooting out water, creating eight separate water fountains, each the height of a human.
The whole statue was carved of a deep green marble, shot through with spiderwebs of cobalt blue.
This morning there were barbers located around each of the tentacle fountains. They brought small oil lamps and had taken water from the fountains, heated it in basins and were shaving locals who stopped by on small, foldable wooden chairs.
Ujin dropped a silver coin into a barber’s bowl and sat down for a shave.
Most men in the city were bearded, and beards were traditionally bound with metal rings. They were also immaculately well-trimmed. Ujin requested a complete shave, he wasn't ready for a beard yet.
Sitting in the early morning sun with a straight razor at his throat he thought about his situation.
He had stirred the hornet’s nest last night. He did not want to tip off his target to his presence so he had to kill the men who pursued him, but he had no idea if the deaths would be traced back to him. A determined target could use a necromantic spell to ask questions of the dead or of the gods, there could have been witnesses he didn't see. Alternately, they might simply think that the mercs had gotten themselves killed somehow, theirs was a violent business, and anyone who slaughtered them wouldn't stick around, so it was plausible they might not bother to find out who did the deed.
There was no way of knowing, so there was no way of deciding if he should strike quickly or wait longer before showing his hand.
With the last pass of the razor the barber reached down and took a towel and placed it in a basin of steaming water. He held it up, wrung it out and placed it on Ujin's face. The wet heat felt good despite the growing heat of the sunshine, and Ujin relaxed more than he had in months.
Ujin was blinded by the towel, but he could hear the activity in the square around him. He heard the screaming and laughter of small children as they passed by, the shuffle and step of workers pulling carts and the swaying of sacks hanging from creaking poles carried over the shoulders, the rattle and clank of a merchants coins in a coin pouch, the shaking of the ground as a giant lizard walked by, its webbed and clawed feet scraping the road with each step. Illusionists needed to listen as well, an illusion that doesn't sound right was as much of a tip off as one that didn't look right.
Ujin drank in the ambient noise.
He needed more information, and he lacked the contacts to get it. Which meant he needed to do some reconnaissance on his own.
After his shave he returned to the inn. Tunker’s Prince Inn was run by one Tunker Mollwine, a halfling with, if you can believe it, a left arm tattoo of a dryad and three silver hoop earrings in his right ear. The halflings in Bhavisyavani were different than the ones in the North.


As it happened his innkeeper was a spectacular chef. Halflings were sensualists after all, so it was hardly a surprise that they could prepare excellent food, but here in Bhavisyavani they applied their skills to business and as a result the city had some of the best chefs (and the best tailors) in the world.
Tunker fried up a local catfish into a wildly tasty morning fare, with a salad of voidnik grown seaweed (with kull juice dressing) and a selection of local fruits that Ujin had never seen before. All was served with a mulled cider made from jiffan apples and a yogurt made from goats milk and honey.
Ujin ate lustily and wondered if staying here would mean he would have to give up adventuring and just eat all the time.
There were worse fates.
After breakfast Ujin spent the morning wandering the shops and local sights in his Ward, he wanted to be more familiar with the area as it would be his home base for a while. He went back to the street where he had met the young boy but he was not there now. He passed by the Ward garrison for his Ward, noting its location if he needed it in the future. Then he spent some time in clothier’s shops putting together a new outfit for his sojourn into the lion’s den. He had learned over the years that spells were a great resource, but it was always better to do things non-magically if possible, and to save that magic for where it was needed the most. He finally found the right establishment, also run by a halfling, one Cal Tindlebaun, and filled with beautiful and colorful clothing. Ujin picked an outfit that was loud and garrulous, something to distract people from his face: a red and orange jacket, a pair of black and white diamond patterned pants and a foppish, grand purple hat with a wide brim and a small clutch of blue peacock feathers.
After a long morning of walking Ujin returned to his room at the inn and slept through the worst of the afternoon heat, waking just after sundown.
His plan for the evening was simple, he would go to the Broken Sword tavern tonight and spend a few hours there drinking and meeting the locals. Hopefully one of them would be able to give him the information he needed about the comings and goings of the owner, Imiran “the Basilisk” Shinn. Ujin needed to see the thief at least once to determine if he wore any rings, if not then the ring was likely hidden in a chest in his home. He also needed to know when he was and was not at home in case Ujin determined that he had to break in to retrieve it.
Most people were creatures of habit, something any good thief would know, so figuring out those habits was key to a successful heist. Thieving is slow, patient work, despite what some people thought, and Ujin was a systematic practitioner.
After a brief meal at the Inn Ujin prepared for his visit to the Broken Sword. He dressed in his new outfit, impressed with the quality of the clothing and the fit, it was perfect. He then proceeded to memorize change self, color spray, hypnotism, wall of fog, blindness, hypnotic pattern, improved phantasmal force and paralyzation.
There were rules in the city about openly carrying a sword, so Ujin opted to bring a full complement of 4 bichuwa daggers and his sling.
Disguise, spells and weapons ready, Ujin headed out into the night to head to the arena ward and the Broken Sword Tavern.
The streets at night were much different than the streets during the day. First off the heat was less oppressive, still there, and still hot, but less intense. Second, musicians and other performance artists were out in force in certain wards at night, and Ujin found he was appreciative of their presence, slowing down as he walked in certain places to enjoy the sounds and sights. Third, certain wards were extremely busy at night, others virtually empty, so it gave Ujin the option to disappear more easily in a less travelled Ward if needed.
The canal ride was uneventful, Ujin managed to catch a ride on a commercial barge rather than waiting for the next transport barge, some merchants allowed passengers to ride on their commercial boat to make some extra money. Ujinsat at the back of a barge piled high with wood for the stoves and cooking fireplaces of the city. A large man was pushing with a pole and periodically shouting at the voidnik pulling below that was apparently quite lax in his duties. Ujin was fairly sure the voidnik couldn’t hear him.
After landing in the armory Ward Ujin asked around and quickly located the Broken Sword Tavern. The building was simple but quite large. Above the entrance hung a sign with a picture of a broken black sword, covered in red blood on a field of grey.