One of my favorite things about AD&D is the “between adventure” time, when players can stretch their role play muscles and do things with individual characters. It’s also fun to see where they bump up against the game world. Today’s session was one that was mostly “liminal’, e.g. between adventures, so I thought it would be a good example of what a 1e AD&D game looks like when you aren’t in the evil temple.
It’s also interesting as my sessions run about ⅓ each of exploration, social interaction and combat, but sometimes you get no combat at all in an individual session. This is one of those sessions. So if you were curious how old school systems handle the non-combat sessions, here is an example. Just for calibration purposes, this one was 3 hours long,
Finally, people often ask for "examples of play" and what you get is a description of walkng down a corrider and falling into a pit. AD&D is so much more than that, and this is an example of play that shows the range of possibilities. Just for calibration purposes, this session was 3 hours long,
Completion
Last session they had broken a merchant out of a warlock’s tower, short story, the merchant faked his death to frame their employer, Kammerli the Ivory. Kammerli is a warlock in my city setting, working for House Himmenghost, one of the noble houses that runs the city.
Kamerlil was framed for the death of Quillor Maas, a wealthy shipping merchant. Quillor took a large sum of money from one of Kammerli’s rivals at House Himmenghost (the party does not yet know who)  and he was spirited away to the keep of Warlock Ghon Mord. Mord was paid to frame Kammerli for murder by keeping Quilor with him for a few weeks then he will polymorph Quillor to look different than he does at the moment, and Quillor will “take over” his previous business interests as a “lost relative” who Quilor left his inheritance to. Kammerli is charged with murder. In my setting warlocks and lords have honor duels to resolve differences, killing someone in their sleep (which was the set up here) is dishonorable.
So the party took the merchant, then left four gargoyles from a monster summoning spell to keep the warlocks at the tower busy while they escaped. It worked, and they made it back to their ward and to their employer. Kammerli couldn’t retain them directly, so his stone giant bodyguard, Jokal, was the intermediary.
They travelled through the city with a sullen Quillor Maas, who was only cooperating as they promised to plead with Kammerli for his life if he returned without resistance. So they met with Jokal, and he took Quillor to the Ward’s Justiciar and Magus, the high level paladin and warlock who are in charge of adjudicating the ward’s administration of city law in egregious circumstances like this. Kammerli was freed, and asked the party to meet at his tower that night.
They went back to Kammerli’s tower and he told them he was grateful that they had found Quillor and cleared his name, and he saw the value of having a small team of adventurers who were NOT affiliated with his House on retainer, to look out for his interests, as this scheme with Quillor was linked to another warlock or lord at House Himmenghost. When he was freed city law made Quillor his prisoner, and he used sorcery to extract much information so far.
So the party stewed about this, and said they might be interested in having a patron. Then he offered them something else. We role played the session in character, they were eating and drinking and he told them the most valuable thing that you can have in the city is real estate, and you aren’t allowed to own any unless you are a citizen. Or you can have real estate bequeathed to you. 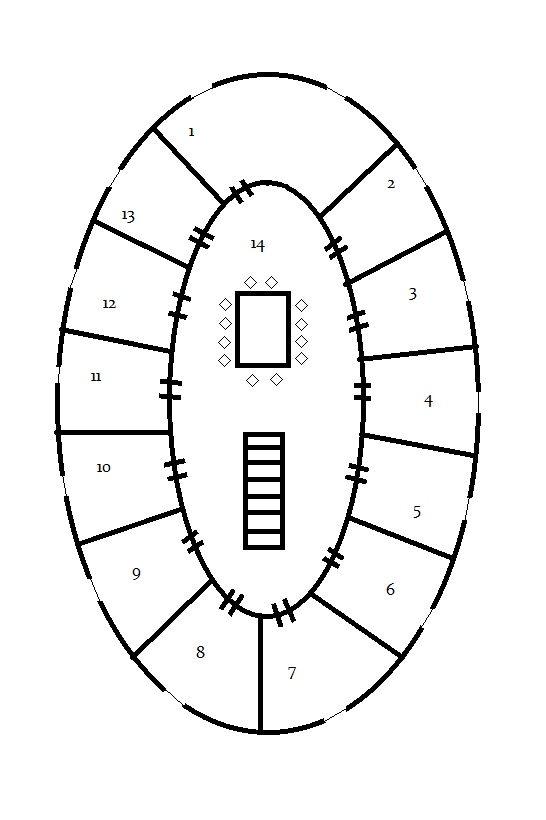 So we rolled, the party rolled a 4, the sahuagin rolled a 1. So that means the PARTY surprised the sahuagin.
This is one of those places where the game mechanics challenge you. How do I explain the Sahuagin being surprised? On the spot I interpreted it like this.
“This area of the sea is well known for sahuagin, underwater dwelling creatures that swarm ships at night as the light bothers their eyes. The ship has lanterns hanging from various places in the sails and on deck on poles. The watchmen sit at these lanterns and if the sahuagin start climbing the hull they shine the bullseye lanterns at them blinding them. On of the sailors up in the sails saw something glint in the moonlight near the water and shone down his light, he screamed, “SEA DEVILS ON THE PORT SIDE” and all the various watchmen shone their lights down, blinding the creatures from the deep”
So now, everyone on that ship gets THREE ATTACKS against the sahuagin climbing up the ship, so that's 10 crossbowmen for now, and the party members on watch.
1e surprise is a harsh mistress, sometimes it hits you, sometimes the enemies.
They will hopefully thin the herd a bit, 30 2 HD sahuagin lycans against a crew of 40 +17 party members will be a rough ride, sahuagin have nets, great weapon stats, and once they use javelins to take out a few bullseye lanterns they will even the odds fast.
That was the session.
Three hours, not a shot fired, everyone had a blast, they loved the reward, they loved the formal challenge from Ghon, they enjoyed equipping and rolling up their henchmen, interacting with the crew, gathering intel and swimming in the ocean!
AD&D is a remarkably flexible engine, and once the PCs move in a direction the game just sort of organically grows from there. It certainly doesn’t reward combat, nor necessitate it, to achieve success in the game, and the sessions without it can be as fulfilling and exciting as those where there is plenty. Like next session, let’s see if anyone gets bitten!

Liminal D&D One of my favorite things about AD&D is the “between adventure” time, when players can stretch their role play ...