Ask Not for Whom the Bell Tolls... Roll the Dice! 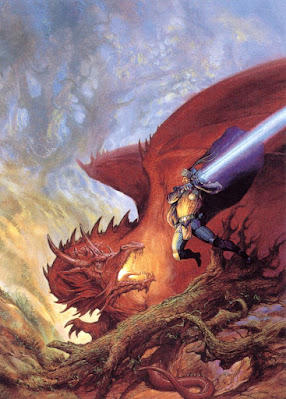 Some topics come up repeatedly on TTRPG Twitter, and one of the most popular topics I have seen is character death. I’ve blogged about this repeatedly, but a recent surge in discussions on the subject, revolving around the idea that “heroes” shouldn’t die ignoble deaths, has led me to revisit the subject.

In particular, I’ve found that people are acting like amateur psychotherapists on this subject, “You don’t allow death in your game, I guess you like ‘easy mode’”, “You prefer heroes that can’t die, I guess you are too delicate for D&D”, “Oh, you like deadly games? You must be some sort of psycho that likes harming others”, “Oh, you run a game where the DM challenges the players, you must have a god complex”, that sort of thing.

I recently saw a post that fits this discussion perfectly. Someone posted a rules clip from a game where the rule stated, very clearly, that PCs in the game can ONLY die in a heroic way. Every hero gets a “death scene” and won’t be taken out by anything less than a villain.

Let’s start out with what is obvious and what shouldn’t need to be said. There is nothing wrong with running a game this way. You can play a fun, interesting, challenging game where there is only one particular route to death in the game. There are also some side benefits to this sort of play, you don’t have to create new characters as often, and players get to “live in” their PC for an extended period of time, deepening immersion and helping them to create compelling, interesting PCs.

I would go a step further, and say that many “old-school” referees emulate this style of play, perhaps unintentionally, when they fudge dice. Over 4 decades I have played in MANY D&D games where the ref “softened” the edges of the game (dialing down monster HP to speed up fights, tweaking rolls to allow PCs to survive, giving PCS max HP or starting above 1st level) to make character death possible, but less likely. Giving the players an even break is even Gygaxian: 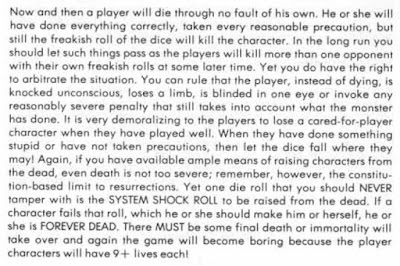 Just so we are all on the same page here I will spell this out. Saving the PCs from death, whether through an explicit rule that says they “can’t” die except in a particular way, or by fudging/altering results to keep them alive, can be fun, challenging and is a perfectly acceptable way to play D&D.

However, the devil is in the details, and there are some important details being left out of this discussion when it comes to D&D (I will be discussing 1st Edition AD&D in my examples, but parallels with other editions and similar games should be obvious).

The main takeaway here is this: there are already a number of ways in which D&D “softens” death in the game, so “fudging” or allowing PCs to reverse or ignore rolls that would lead to death as you have taken it off the table is essentially “double dipping”.

Allow me to elaborate.

A. PCs in D&D have saving throws, these are used for individual spells but also for more mundane aspects of death such as poison, falling, etc. Gygax believed that all PCs should have a chance to survive even deadly things, as they were heroes. So one of the base mechanics of the game is designed to ensure that PCs always have a chance

B. PCs also have hit points, as has been sagely pointed out by thousands before me, hit points aren’t just “meat points”, they reflect luck, skill, will of the gods, etc. A high level PC can be stabbed, struck and shot with lightning yet still walk away intact because of hit points, almost comically so, giving the PCs a safety net that expands with time.

C. There are various class abilities that mitigate the possibility of death: paladins get a blanket +2 bonus on saving throws, monks get a save to deflect missiles and to reduce damage from failed saves versus certain spells. Druids can change shape and heal.

E. Resource management is another important way to stave off character death, PCs who pack rope reduce their odds of falling while climbing down a sheer cliff, PCs who purchase beladonna and wolvesbane can reduce odds of being turned into were creatures, packing wine or vinegar can help dissolve various slimes, etc.

F. D&D also involves teamwork and support from fellow PCs. Although solo campaigns are obviously a thing, many people play D&D in groups, and those PCs can help each other to avoid death and improve odds for survival.

H. D&D is notorious for the power of healing magic, both general healing spells that restore HP to spells that regenerate or even bring PCs back from the dead. Just for context, remember two things: first, D&D players complain endlessly that clerics are “heal bots” suggesting that healing magic is prominent in the game, and two, the CON based limit on being brought back to life implies that life restoring magic is assumed to be at least somewhat common in the game.

I.Player skill is also another important component in this discussion. In games where death is on the table, those who play smart, plan well, run away when necessary, etc. are more likely to survive by avoiding those ‘save or die’ rolls in the first place.

There are a few things to note here.

First off, as you can see D&D already has a number of death mitigating options on offer. So adding another layer to the process by removing the possibility of character death seems, I don’t know, kind of pointless?

But more importantly for me, and for the playstyle I prefer, eight of the items above rely on the player, not the referee. Player choices are the most important factor in survival. People like to take a “slice” of the game, the moment when a roll has to be made, a roll that could lead to death, and make claims about the game based on that one moment. I have even seen people suggest that D&D's mechanics are 'bad design' as they have rules that have consequences like these. It is taken as a sign of inelegance or a failure to appreciate the nuances of what gamers want.

This just completely ignores all of the context I have discussed above. By the time that roll happens there have been multiple decisions by the party that led to it, multiple ways to stave off death. Avoiding death is thus to a degree a player skill, not the whim of the referee, or the players just saying, “No, I don’t want my PC to die”, it’s a skill they hone with experience. It is not something that robs them of agency, as I have also seen some claim, instead it is the culmination of their agency, specifically their choices and actions led to that dice roll, that chance to survive or succeed.

The other important point for me is that using the games built in “luck mechanics” means that neither myself, nor the player, are responsible for making that decision. The dice do that. People often say this sort of thinking is ‘hiding behind the dice’, but to me it is ‘ensuring fairness’, I don’t want to have that kind of power, or decision making responsibility on this issue, neither do I want the players to have it, some things in the game should be beyond player and referee control. It makes the game more immersive, and it removes the burden of deciding if something “serves the narrative”.

But when “the dice” make a decision, ALL OF THE CONTEXT OF PAST DECISIONS AND ACTIONS AND REACTIONS inform that roll. The roll is just the culmination of it, the place at which the complex web of decisions bumps up against the “reality” of the game. The game is a dance between game world and PCs, the referee ensures the dance is rich and engaging in challenge and depth, and this dance leads to a roll.

When you decide that the failure of the roll is, ‘what killed the PC’, at least in a game like D&D, you are just focusing on one element and ignoring the whole. PCs die because of the context of all of those issues, and their actions, the game has multiple built in cushions to help ensure they have a good chance of surviving if they aren’t too reckless or unlucky. To say it’s “all about a failed die roll” is to miss something profound.

Again, you can play without character death and D&D works just fine. But keeping it in isn’t sociopathic, or combative, or evidence of a god complex. It is a brilliant piece of game design. If you don’t like how it plays, you can change it, and decades of gamers have done just that. But there are rewards to playing this way, and the reliability of those rewards that I have seen suggests they are worth knowing.

If you leave death in the game and the players beat it, they have CHEATED DEATH. If you take death out of the game you can certainly challenge them, but they won’t have that experience. In my experience knowing your character is mortal, can expire on the roll of a dice, mirrors knowing that you can expire in the real world. It creates a bond and an immersion that is hard to create in other ways.

But it is about more than just, “one bad roll”, to see it that way makes you blind to so much of what is happening in a TTRPG and what makes it so exciting at the table. When my players leave a session they know that it was all out on the table, and that they walked away intact, that they took the real risk, and it paid off, that’s a sweet, hard to beat feeling.