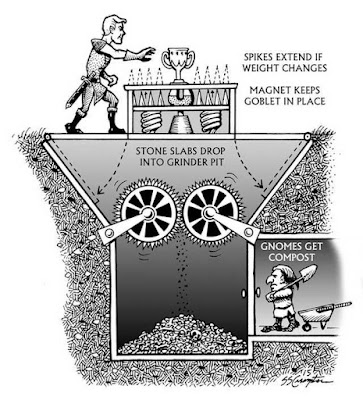 Traps have a bit of a bete noir reputation in D&D. On the one hand they are a perfect fit for a fantasy game, the trap filled dungeon is a well worn trope. However, traps are not as popular as you might think. I regularly see people saying either that they want to use traps but haven’t found any they like or that they just don’t use traps at all, as they aren’t fun or aren’t fair.

That’s a shame, as a good trap can bring a lot of tension and excitement to the game, as well as a lot of old school flava. I’ve given this one some thought over the years, and I settled on a system that has playtested quite well.

The first thing that needs to be addressed when talking about traps is their ubiquity. Traps should, in all honesty, be fairly rare in D&D. Traps are found in two primary places, first, in the wilderness to trap animals for hunting, and second, in buildings/dungeons/tombs for the purposes of stopping intruders/thieves.

You shouldn’t find a trap on a city street, traps shouldn’t be in any high traffic area where people regularly move back and forth. So say the party broke into a temple, unless that temple is deserted and old it should not really have traps, as the regular inhabitants would be at risk. A trap in the “treasure room” makes sense, a trap “in the hallway” of an area where NPCs/monsters regularly travel should be much less common.

Traps should be reserved for remote places you are not supposed to be in, or individual rooms in larger complexes that house something important, not in high-traffic places that are regularly used for mundane purposes. If you put traps all over the place then you FORCE players to either spend all their time checking for traps, or for them to just treat them like general HP attrition and ignore them. Neither option is much fun.

Instead, I would recommend making traps a special encounter, one that doesn’t happen very often, but one that is challenging. Part of the mystique and fun of a dungeon style environment is precisely that they are VERY dangerous and challenging, so putting traps in the right environment can really make the game.

But to be VERY clear, traps are DANGEROUS, so if you choose to use them, then you are choosing to make the game DANGEROUS as well.

Thieves are a bit of a challenge as they have abilities that, in principle, anyone should be able to obtain. “Hiding in shadows” and “moving silently” for example, any child can attempt and pull off these two, but they are hidden behind a class ability wall. That always struck me as odd.

So in Bhakashal, everyone gets to try these tasks, but thieves get an additional skill based roll if the regular roll fails.

The other issue associated with traps is player versus character. Old school games focus on challenging the PLAYER, not the character. It is difficult to do this with many things, so for example, a CHARACTER might be able to read a strange monster language, but a PLAYER won’t be able to do that as the language doesn’t actually exist to be learned.

Traps are one of those things that can actually challenge the player, as mechanical devices can be puzzled out and messed with. If the trap is a triggering plate connected to a spring that shoots arrows out of the wall, you could “disarm” that trap by jamming the plate so it couldn’t engage or hammering iron spikes into the arrow holes.

So any system that puts traps in the game should be able to challenge the players, not just the stats on the character sheets.

With the questions of ubiquity, thieves versus non-thieves and player versus character engagement out of the way, the next question is execution.

So let’s say the party is in a dungeon, a place where you would assume there could be traps. And let's assume the party is about to enter a corridor with a classic cantilever trap, e.g. the corridor is like this:

So once the party gets beyond the fulcrum point it will tip and drop the party to a pit of spikes below and then tip back to seal up the pit.

How do you adjudicate this?

Approach 1 - Whenever the PCs enter a new area (turn a corner, enter a room) you describe what they see and they tell you what they do.

So “the corridor stretches 100 feet long, ending at a heavy wooden door, there are torches inset into the wall at 20 foot intervals.”

Say that the thief now says, “I’ll look for traps”.

You make them roll their FRT percentage, and if they are successful you describe something that will reveal the trap, for example,

“You have been moving along slowly and looking for tell-tale signs, tapping the ground and walls as you go, and as you approach the halfway point your tapping changes in tone, like something harder was under the floor for a moment, you stop and see that the floor ahead of you, unlike the floor behind you, has scrapes and signs of damage, and the walls behind you have scrapes on them as well. A fulcrum trap! The harder part under the floor must be where the fulcrum touches the floor, and the scrapes are from doomed adventurers trying to stop sliding down, and the floor behind you scraping the walls on the way up! You hold up your hand and get the party to stop before tipping it over”.

Approach 1 has its strengths, it doesn't require the player to know how to check for traps, it relies on the dice roll to establish results, and for the referee to narrate those results to make them fit the game world. So it’s easy and fast.

However, it’s kind of dull, and it also removes the player from the process entirely, it becomes a case of a rote roll without engagement. You may prefer this for your game as you just want a trap to be yet another form of HP attrition for the party, and that’s perfectly fine, but for me it isn’t engaging and fun.

Approach 2 -  When the party enters a new area and you have described it, the party thief says “I check for traps”. You then ask the player how they are doing that. The player then responds:

“I take out my crowbar and tap the floor as I walk forward, if there is a trapdoor it would be thinner than the stone floor and should sound different”

“I take out my waterskin and dump water on the floor ahead of me, as it spreads out I look to see if the water outlines a trap door or trigger, or if the floor has a slant to it”

That sort of thing. Then, if the PC’s actions might have a chance of detecting the trap, you make the FRT roll.

The advantage to this approach is that it is engaging for the player and their choices make a difference. If the player was in the cantilever trap hallway and tried the first option, they would have a chance to notice the difference in sound at the fulcrum and then notice the marks on the floor.

The disadvantage to this approach is that the players, for the most part, don’t know how to “check for traps”, so they often won’t know how to describe checking for traps. I vacillated between these two approaches for years, the former was faster and easier, but made traps so dull that they weren’t worth using. The latter made the process engaging and tense but was more involved and harder to do.

So I decided on a “third way” for dealing with traps.

One of the things I love about this approach is that it allows the PC thief to slowly build up a set of techniques to check for traps, and as they build up more of those techniques, they feel more skilled and capable. On the note of point 5, if you want to run the game on, "hard mode" you don't have to make suggestions, but I find that once you "prime the pump" with a suggestion or two, players start to get the hang of it and come up with their own ideas.

This system also creates tension, describing how they are checking for traps and interpreting the feedback that the referee gives them is super-fun. They feel like Indiana Jones or Lara Croft, and it is more than just a rote dice roll to see what happens. Keeping them rare but “solvable” by any PC, with the thief gaining greater odds of success, is just the right balance to make traps worth your time.