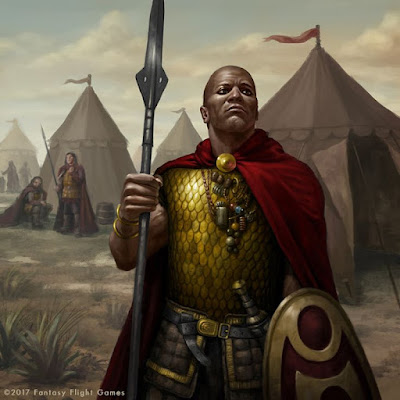 When I set out to create Bhakashal the goal was to produce something built on a 1e AD&D chassis but to expand, revise and tweak it in various ways. Some things I have left entirely untouched, others I have rebuilt from the ground up. Armor was one of the places where I was unsure. The armor tables in AD&D are pretty good as is. I did some research into credible academic sources and found that many of the stats given for armor were pretty close to their real world equivalents

Armor weight, for example, was in historical ranges in most cases. And the general ranking of armor protection was about right. However, there were two things I wanted for Bhakashal that were lacking in the existing armor rules.

First, there were historically significant types of armor that were left out of the system. The Roman Lorica Hamata for example, was extremely prominent historically, but there is no direct equivalent for this on the 1e AD&D armor table. I have had players ask to have their PC armored like a gladiator, but there are simply no stats for this kind of armor on the table either. And, given that Bhakashal has non-human playable groups like anthropomorphic turtles, frogs, insects and birds, I wanted options for things like “breastplate only” armor.

Second, I like the idea of a Weapon vrs AC system for the game, and to make that work, I needed to organize the table differently.

So, how to go about this? First things first, I hit the books, looking at well-researched accounts of armor use through the ages. The challenge is that historical armor classifications are often based on incomplete evidence. So the TERMS used to classify armor are fairly loose, not to mention that some forms of armor listed, like “studded leather”, don’t have any direct real world equivalent.

Also, academic sources often use language differently. “Splint” armor in the academic literature, refers to any armor with a leather base that has metal bolted or tied to it, so it would include both laminar and scale armor, and despite it not having any real world equivalent, studded leather. Even when historical evidence is fairly unanimous, there are exceptions, questions and conditionals. Thus, any “historically accurate” game mechanics are hostage to the fact that history is contested in perpetuity, and evidence is spotty and scattered in most cases

In addition, Bhakashal is set millions of years in the future, when the sun burns red in the sky, so there is no need to have “historically accurate” armor in the game. Having said that, I didn’t want to come up with something SO different than historical armor that it wouldn’t be recognizable. Knights in shining armor are pretty cool after all. So I decided to break armor types down into categories (e.g. leather, plate,etc.), and fill out each category on the table.

The next question was how to organize those categories. Armor protectiveness comes down to two main factors, the strength of the armor (e.g. leather versus metal) and the coverage it provides (e.g. torso, head, arms, legs). Some armor is very protective of one area (metal breastplate) but provides no protection of others (e.g. legs). Various gladiator armors are like this, some have leather on one arm but not on another, some have a metal shoulder plate and helmet but no breastplate, there are too many variations to give a separate armor class for each one.

I toyed with combining a location of hit system with an armor system that specified which parts of the body it protected, but it was far too fiddly and would make fighting armored opponents far more complex than fighting monsters and unarmored opponents, so I dropped that early on. Instead I organized armor based on four characteristics, weight, coverage, strength and freedom of movement.

At the top of the list was padded leather armor, light, partial coverage (it doesn’t cover legs or arms), low strength and excellent freedom of movement, at the bottom of the list was full plate armor, heavy, covers everything but the eye slits, strongest armor available, and restrictive of full movement. Then I just had to fill in the table in between with at least one armor entry for each armor class.

Organizing the table in this way also helped to fit my custom WvrsAC system. The original WvrsAC system in AD&D was quite fiddly, as it assigned a modifier to each AC listed. Sometimes that modifier was 0, but having nine modifiers for use with armored opponents seemed excessive. I simplified this system into three categories, metal, leather and no armor, so I organized the AC table in similar terms. The WvrsAC system is optional as it adds complexity (and will be discussed later), so the table works without using the system, but it is also compatible with it.

Then it was shields! In 1e shields are hardly worth your time, but historically, shields are VERY important. My default way of making something interesting is to give the PCs tactical choices. In 1e shields impact forward facing AC and one flank attackers and is restricted in how many attacks it counts against per round. I built on those ideas for Bhakashal, and added an idea from 2e, shield proficiency.

Just like weapon proficiency, you can take shield proficiency, and this adds to what it can do. This makes sense to me, in “just anyone’s” hands, a shield has a small impact, but a trained soldier with a proficiency in the shield gets the full benefits. Bhakashal leans in to the class structure of D&D, tying special bennies to class wherever possible. I also adopted Trollsmyth’s Shield sacrifice rule for Bhakashal, and extended it based on shield size. The rule states that you can sacrifice your shield to neutralize any one melee attack against you. It’s an elegant, simple rule.

In terms of the listed armor characteristics, weight figures into overall encumbrance, cost varies a lot and at the start of the game only certain armor may be possible, and heavier armors get a movement penalty as well. A few words about that.

I have read enough about heavier armor to know that fast movement is possible in certain kinds of plate mail, and in all heavier armors. It’s not that the PC can’t run or sprint. It’s that heavy armor, OVER TIME, makes you slower. Picture a group of adventurers in plate mail moving through a forest or jungle, in the blazing heat, on uneven ground, etc. Heavier armors take their toll over the whole adventuring day, so the result is a movement penalty.

With respect to freedom of movement, armors vary, so this translates into an initiative penalty. I think this is very important because it was historically important, many soldiers in the past traded protection for speed and freedom of movement. Heavily armored D&D PCs do the craziest stuff, climb mountains for 8 hours in full plate, if that’s going to be a thing, there should be some in-game consequences for it. Both of these make sense and make varieties of armor game mechanically different.

One thing that Bhakashal does very well is to make your choice of weapon or armor MATTER as each configuration is a bit different. Sometimes only in small ways, but small things add up fast, and can matter at the table.

So bring on the gladiators and the Roman Legions, and strap on your shields, to adventure!

* Costs are relative, for example, if you set the price of padded leather to 1gp, then a set of heavy plate mail is 500gp.

** Heavy plate is customized, thus any magical heavy plate must be diced for, to see if it fits (1-2 on a d6).

1. All shields improve AC by 1 point

2.A small shield weighs 30 gp, defends against maximum one attack per round and may be sacrificed after absorbing the full damage of one melee attack

3. A med shield weighs 50 gp, defends against maximum two attacks per round and may be sacrificed after absorbing the full damage of two melee attacks

4. A large shield weighs 100 gp, defends against maximum three attacks per round, gives a 1 point initiative penalty and may be sacrificed after absorbing the full damage of three melee attacks

5.  A weapon proficiency slot in shield improves AC by 2 points, allows defense against one extra attack per round and may be sacrificed after one additional attack per round