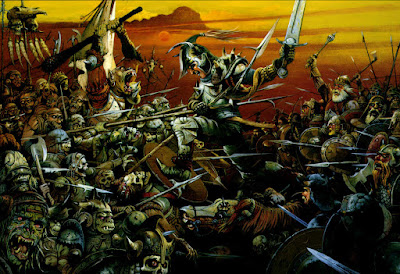 I wrote a blog post last year dealing with the issue of “problematic” monsters in D&D, I sent it out to two different “left leaning” people that I correspond with on Twitter asking for opinions.

They never responded. So I sat on the piece, figuring it was “too much”.

That’s just how ridiculous the TTRPG Twitter is at this point.

All arguments have premises, if you reject a premise, the argument falls. So here is the premise of this argument:

If you disagree with this premise, then you can stop here.

If you accept this premise, read on.

So you have two choices:

Now, there are a few options available to you at this point. Perhaps if you think A is correct, monsters at one point represented something in the real world, but subsequent use has changed that. So, for example, orcs may have been caricatures of real world groups at one point, but over the years that association has changed and now the representation is no longer strong. I think many D&D players ended up in this place, they saw orcs as empty signifiers as by the point they encountered them, that’s what they were.

Or perhaps you think that orcs were never meant to represent any particular real world group in the first place. Wherever you fall on this argument, one thing is abundantly clear if you take the time to read any of the academic literature on this stuff: the perspective on the left is very emphatically B, and for good reason.

Most monsters in D&D are mythological, and mythological monsters represent other things in the real world. Some interpretations claim that monsters are symbols of our vices and sins (lust, greed, etc.), others will claim that they represent real world groups of people that were considered dangerous (e.g. witches, dryads, sirens, etc. represent the patriarchal fear of female power), but many of the “monsters” of mythology are representative of groups in the real world that have been considered dangerous.

I think this is a solid argument, as I accept that mythological monsters were meant as warnings about real world groups/issues, this seems obvious. And if they were meant to represent real world groups, then they are “othering” by default. Reducing real world groups to “threats” is a process of undermining their humanity and othering them, pretty much by definition.

Monsters are not real, monsters are the “other”, and monsters are historically associated with real world groups/issues, so any monster in D&D is, in principle, “problematic”, e.g. either racist, sexist, ableist, etc, etc, etc.

It won’t stop with orcs, or undead, there is plenty more to come.

Which brings us back to the OGL and the morality clause.

I think the conclusion here is pretty obvious, but I’ll say it anyway: almost every monster in D&D is going to be “problematic” by these standards, standards already used to argue that orcs are “racist”. So if the TTRPG community “on the left” already accepts the “orcs are racist” argument, they will inevitably have to embrace the “most if not all monsters are problematic” argument.

Which means that the morality clause in WotC’s newest iterations of the OGL is easily weaponized to silence people. I suspect this will lead to two results:

In short, the morality clause in the OGL will become a tool in the culture wars.

The root of this problem is that people on the left haven’t really thought through the consequences of what they are doing. They were more than happy to jump on the orc train when it was first discussed, as it gave them a quick and easy way to dunk on old school gamers as “racist”. I was surprised at the initial fervor with which it was used in this way. I mean, I’ve been playing D&D for decades, and I haven’t had a single POC player complain about orcs or suggest they were offended by them until the last few years. And yes, I’ve had many POC players over the years, and yes, they were vocal and politically engaged so if they were concerned I’m sure it would have come up. So clearly the people who were supposed to be stereotyped by fantasy orcs weren’t concerned about it for decades, for many of them, orcs were just orcs, and any historical associations were long gone by this point.

But I shouldn’t have been surprised. Social media is ALL ABOUT the quick dunk, obtaining Twitter points for accusing someone of something heinous, which both makes you look virtuous and makes the community “safer”.

I don’t think that many of these people really understood the theory behind their accusations, that pretty much all monsters in D&D could be discussed in this way, and thus that almost all of the game is “problematic” on a basic level. I’ve seen a few people over the last few years realize this, they will consistently argue that D&D is “colonialist” all the way down, and is thus irredeemable, e.g. it cannot be “decolonized” and is thus hopelessly flawed, and that playing it is inherently harmful.

The solution to all of this nonsense is to go with option A, TTRPG monsters aren’t real, and aren’t meant to represent anything in the real world. I think this makes sense as the associations mythological monsters have now are very different from the associations they have had historically. This happens as decades of media representation have changed the meanings and associations.

Take zombies as a case, historically, there is ample evidence that they have racist associations, but modern zombies are often associated with things like rampant consumerism. I think this is one of the consequences of “postmodern” theory, if you are constantly problematizing and reinterpreting signifiers then you can’t hold on to any one association or meaning, they will always be shifting and changing.

In fantasy TTRPGs monsters are there to provide opposition for the PCs, a threat to motivate them and to make the game challenging. I refuse to believe that thousands of POC gamers over the last 4 decades or so associated humanoid races like orcs, gnolls, etc. with POC, and were thus engaging in the slaughter of “stand-ins” for themselves in some sort of self-hating process in service of white supremacy. I suspect that for most people playing D&D over the years, the historical associations that would have made evil monsters “stand-ins” for real world groups were lost years ago.

I think that WotC should just drop this morality clause entirely. If some 3rd party makes problematic content using the OGL then WotC can just publicly denounce them. No one actually believes that WotC is responsible if a third party makes problematic content while using the OGL. If WotC is using this morality clause with good faith, I think it will backfire on them, creating endless problems as content is put under the microscope from both sides of the political spectrum to fuel the culture war.

If, however, they are just doing it as a shield to justify their draconian approach to the OGL, if the concern is not genuine, then they have just botched this up terribly.

Either way, it will be an interesting future for WotC.

Building Bhakashal - Session Report My Wednesday group had a new player join yesterday. The party had been sent to spy on a powerful warlock...