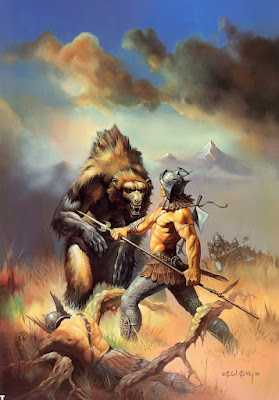 One of the goals with Bhakashal was to make PCs heroes, not super-heroes. When the game is deadly, when there are real risks to be taken, that’s when it is the most exciting, the most immersive, and when the rewards of success are the sweetest.

HP bloat in 1e AD&D is a thing. In part this is due to the fact that many DMs “spike” HP, or inflate them, in order to make the game more survivable.

Not Bhakashal. Instead, the game is made deadlier in several ways.

First off, Bhakashal lowers HD for some classes and raises it for others, but the overall effect is that PC HD, on average, are lower. Monster and animal HD however, stay the same, so comparatively, PCs are less powerful than they are in 1e.

Secondly, PCs can “spend” HP to alter rolls, they don’t have to of course, but the temptation is there, and in actual play the result is that PCs dip into their HP supply periodically to change misses into hits, failed saves into successful ones, etc. That means that, on average, PCs will have fewer HP during play.

Thirdly, healing is different in Bhakashal. Having run a substantial number of AD&D games over the years it became clear to me very early that clerical healing was an issue with respect to HP and survivability. Most parties had at least one cleric, and due to the clerical spell bonuses (related to wisdom) it was common for clerics to have a LOT of healing spells. Depending on chargen method, PC clerics could have exceptional wisdom scores. Say a 5th level cleric with a 15 wisdom, she would be able to cast up to 5 Cure Light Wounds spells per day. Add healing potions and the potential for more than one cleric in the party, and things get silly.

The other thing that makes AD&D too “superhero” for Bhakashal is the speed of healing. A character can be reduced to a single HP and get healed then they are fighting fit again. That always made the process too easy. If you are almost killed you shouldn’t be running around at full steam right after being healed.

I mused about this situation for a while before stumbling upon a solution, oddly enough while watching an old Star Trek episode, The Empath. In this episode an empath can heal people who have been hurt, but by doing so she temporarily takes on the damage to herself, then it slowly (but faster than naturally) heals. This idea, of taking on the damage to yourself then having it heal after that, is both evocative and dangerous. It makes “battlefield healing” a very risky affair. Anything in the game that takes time creates risk, and requires the PCs to balance risk and reward. Balancing risk and reward is one of the joys of D&D, as it requires skill and good judgment, and it creates tension.

Bhakashal changes the rules for healing in the following ways:

Anyone reduced to less than 0 HP loses 1 HP per round until they reach negative [CON bonus + HD] in HP, then they die. For example, a mercenary, with a d8 for HD and a 12 CON (CON bonus +1) would bleed out until they reach -9 HP. Binding wounds and stabilizing the victim will stop HP loss.

In addition to combat criticals and weapon criticals, in Bhakashal combat quickly wears you out and causes penalties. Bhakashal uses the following procedure:

The net effect of these rules at the table is that battlefield healing is much less common, and regular natural healing is a bit better than AD&D. Healing potions become much more valuable, as well as any magic items that heal, as they don’t deduct HP, even temporarily, from the healer. Also, the negative penalties associated with being below 1/2 of your total HP make taking damage a risky affair, as there are actual impacts on performance based on being wounded.

The net effect of these changes is to make combat into something that, for some at least, it hasn’t been for a long time: very deadly.

Building Bhakashal - Hirelings and Retainers Retainers (“henchmen” in AD&D) are a crucial part of successful play. Bhakashal is a very d... 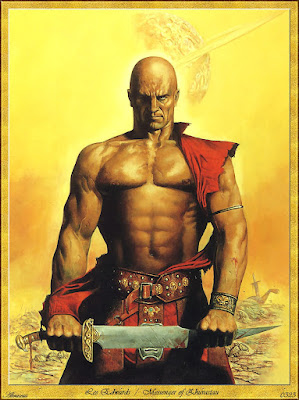