Building Bhakashal - Homebrew vs. Published Material in your Campaign 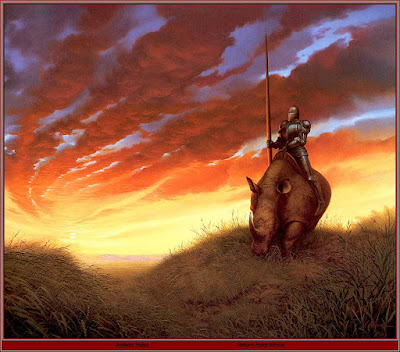 Inspired by more Twitter inanity, here are a few thoughts on homebrew versus published material, from someone who uses both. TLDR: costs and time are relevant, but not how you think.

One caveat: even if you run mainly published modules, you will have “between adventure” gaming that will inevitably involve some “homebrew” content, and even if you run homebrew content, you will likely have at least SOME published adventures or scenarios at your table (e.g. published wandering monster tables). Like most of the empty, ridiculous arguments on social media, most people do something in-between, few people do entirely one or the other. With that in mind…

If you want to save money, you can do it yourself. There are enough materials in the game for dungeon and adventure generation, and in second party supplements, blogs and videos to help you learn how to make your own adventures.

So you could, in principle, run an entirely home brewed campaign where you use only your own adventures and scenarios, and save a lot of money.

However, you can still game with published materials on the cheap. There are numerous ways to do this: free material on the web, second hand material from older editions and other games that you repurpose, pooling and sharing purchased game materials between referees, libraries sometimes have RPG materials. I played D&D for decades this way, I NEVER bought what was “new”, but got everything second hand or after it was popular. Worked just fine.

I think this is where people get it wrong the most. Time is not the issue you think it is.

The idea appears to be that making your own content takes significantly longer than just buying existing content. That would be the case if it were say a board game. But TTRPGs are different. If you buy a module, you will likely have to adjust it to fit your campaign. This sounds innocuous, but it is most certainly not.

Modules are designed with no knowledge of your home campaign or your house rules, and this profoundly impacts how you deal with modules and pre-published adventures. I have never run a module “as is”, there are always lore changes to make, mechanics to change, theme or flavor changes to make, adjustments based on my house rules and whatever “optional” materials I have in my game, and, almost always, changes that need to be made because the module designer did not anticipate something my players have done or will do.

There may be people who play modules “as written”, and good for them, perhaps they are just lucky and their game style matches the style of the adventure well enough. But in my experience you almost always “mod” a module, and as such, it becomes more work than you expect.

In addition, when you get a module you have to familiarize yourself with the material. You could of course show up and run it without prep, but in reality you will have to spend time reading and puzzling out the module before you ever run it. Then there is the fact that materials you have made yourself are always easier to remember and run than someone else’s stuff. A published module raises interpretive issues, and you want to at least understand what the author meant before making any changes.

In short, the idea that people use modules because it “saves time” is largely a fiction.

If you want a sense of how this works, check out these two threads of mine about adjusting Expedition to the Barrier Peaks for play in my campaign:
Mapping Prep Thread - Barrier Peaks
Preparation Thread - Barrier Peaks
Comparisons
I have, however, had the opportunity to run different varieties of game over the last few years in my after school program, from the time I started my business I have run 1 year + campaigns for 15 separate groups. Some were entirely home brew (no published adventure materials), most were a mix, and at least two were all published modules strung together. In each case we played for at least a year, e.g., from Sept to June, 80 hours per campaign, around 1200 hrs of table time.

So it is possible to make some meaningful comparisons.

For example, my Tuesday group last year spent about 8 months playing in encounters that I had created for my home brew setting, I didn’t use any published modules or adventures of any kind. At the same time I was running a Friday group that did Castanamir, Forbidden City, White Plume and Barrier Peaks over that same 8 month period.

End result, the module based campaign was about the same amount of work as the entirely home brewed portion. I would only place one caveat on this, that the published modules have been run by me before, so this time through they required MUCH less prep, just a quick reread and I was ready to go.

So, although there may be people who find that adjusting pre-published materials take too long for them, or people who find that making their own material takes too much time, I find that both approaches take time and effort, so choosing between them is not based on effort, time or cost alone.

What is the Value in Each Approach?

The main attraction of home-brewing your own materials is that the process is 100% customizable. Since you are making it, you can make it exactly how you like, rather than having to “fix” someone else’s work. You can also design adventures that fit your party’s past actions and preferences perfectly. A completely home-brewed game can feel very “real” in a way that published modules do not.

The main attraction of published material is that someone else is coming up with the ideas for you. Yes, you have to customize them for your game, and that’s not without cost, but I have run some of the most epic, fun, D&D of my life taking an existing module, hacking the living daylights out of it to fit my game world, and running the Frankenstein monster at the table.

There are quite literally HUNDREDS of modules and adventure materials for you to run for D&D and D&D adjacent systems, more than you could ever read and play. With some (or many, as it happens) adjustments, they can make excellent additions to your game. This is one of the reasons I ADORE the old school modules by Gygax and Co. because they OOZE flavor and atmosphere, and after tuning them to my campaign world they fit in perfectly and wowed the players.

My advice to people is to play what works best for you as a referee, if you find that running other people’s stuff is stressful and requires too much work, then don’t run published stuff. If you find you are often stuck for ideas or fall back on familiar themes, then published stuff might be a good choice for your table.

There is one other advantage to published materials, namely that you get a “shared world” experience with other gamers. You see this on social media all the time, someone will recount running published module X and then others will chime in about how awesome it was to adventure in that module. You don’t get that with homebrew.

On the flip side, a homebrew game has a mystique to it as well, instead of a shared experience you get a unique experience, which is pretty cool as well. Not to mention that you can run a new kind of adventure home brew if you find that published adventures don’t do something that you want to do. There is something to this, many modules and adventures are similar in theme or execution, so home brew can be very liberating.

I have settled into a refereeing style that has me running about 75% home brew and about 25% heavily modified published work (usually classic modules revisioned). There are a few classic modules I never tire of running, and if I can slip them into a campaign I will, because they are flavorful and fun. Barrier Peaks, Forbidden City, White Plume, Descent, these are classics because they captured a time and a vibe that was unique and special. They always run well at the table, and remind my players of where the game came from.

But they have also loved the home brew content as it is unique, unlike anything they see on screen or read about in current fantasy fiction, something of your own can resonate in a unique and powerful way. The conclusion to all of this is the following: do what works best for you, published, home brew or some combination of the two, anyone telling you that either option is “bad” or “wrong” can just be ignored.

Building Bhakashal - Magic Distribution Image by Judson Huss I have been asked why Bhakashal is an AD&D retroclone, and it is largely du... 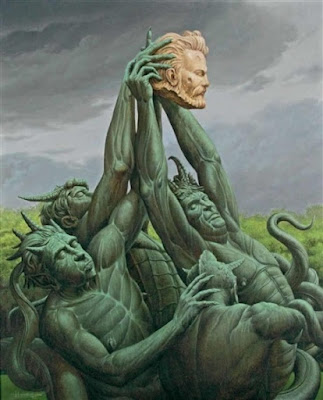