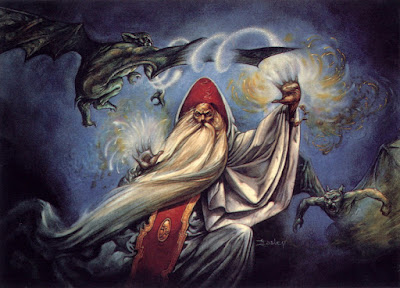 I have mixed feelings about luck mechanics in D&D. On one level I don’t like them, there is something to knowing that the dice roll is final that matters to the way the game is played.

However, everyone has had that player, or that session, where EVERY roll goes badly.

In D&D, HP are essentially luck points, and they tend to skew high, whether because of house rules that bump them, reroll attempts on HP, minimums, averages, whatever. The classic AD&D model is low maintenance and does what it promises on the tin, it means you are more likely to survive as the hero should, but it doesn’t make you invincible out of the gate. By mid to high levels, however, PCs get a bit silly, a 10th level cleric with say 50 HP, or a 10th level fighter with say 80 hp, is hard to beat.

HP in D&D are “passive” luck mechanics, you don’t have to do anything, they are just there. The problem is that they only apply to one thing, and players have a lot of rolls to make, to hit, saving throws, etc.

I have met more than one player in my time that would have LOVED to take one of those “luck points”, in the form of HP, and add it to their “to hit” roll when they just miss. However, if you allow PCs to use as many of their HP as they want for this purpose, then at higher levels they will be able to guarantee certain rolls. That’s not what you want either.

What will work is a luck mechanic that is small but discretionary. I’ve toyed with many ways to do this. In Bhakashal, I have come up with two mechanics for this. Both are tied into level, so a brief word about that. In 1e AD&D level progression is uneven, classes do not level at the same rate. Over longer campaigns you see thieves level up fastest, then everyone else levels up pretty much the same except for paladins and monks. Bhakashal maintains that basic relationship.

However, Bhakashal changes the HP system.

So all 0-level guards, soldiers, bandits, peasants, etc. have 4 hp. All first level mercenaries have 12 HP, all first level justiciars, spartans and slayers have 8 hp, and all other classes have 4 hp to start. All 1HD monsters have 12HP.

Then, all classes and monsters get 4 hp per level after that. The point of these changes is twofold, one, to cut out the HP bloat of AD&D at mid to high levels and to make the described damage / lasting damage system simpler to manage.

How does the Bhakashal HP system compare to the established AD&D HP system? The comparisons can be seen here, with traditional AD&D classes followed by their Bhakashal equivalent. For the traditional D&D classes I have listed average and max HP.

For mercenaries, their HP is higher than the average for fighters until level 6, then it is lower from then on. Also, the mercenary HP is lower than the max, hovering around half, for all but level 1.

For seers the HP are lower than the average from level 1 and half the max all the way down.

For spiders the HP are higher than average all the way through, but 2/3 the max all the way down.

Warlocks get the best deal of them all, their HP is the max all the way from level 1.

That’s all compared to 1e and done without adding in any CON bonuses or penalties.

Bhakashal uses a system where your damage is described rather than reported as HP. The description of damage is linked to how many HP you have left of your total. From full to 3/4 of your total HP nothing actually hits you, all of that quarter of your HP are luck, favor of the gods and dodging.

From 3/4 to 1/2 your total HP all blows are minor, glancing, nicks and such, and are located on your body using a location of hit chart. Also, you take a -1 on all your rolls at that point due to exhaustion, exertion, etc (the PC’s status is marked by flipping over a Jack and leaving it in front of the player).

From 1/2 to 1/4 your total HP all blows are major and are located on your body using a location of hit chart. Also, you take a -2 on all your rolls at that point due to physical damage and exhaustion (the PC’s status is marked by flipping over a Queen and leaving it in front of the player).

From 1/4 to 1 HP all blows are critical, major damage, and are located on your body using a location of hit chart. You take a -3 on all your rolls at that point due to physical damage and exhaustion (the PC’s status is marked by flipping over a King and leaving it in front of the player). Also, the PC rolls a save versus paralyzation, if they fail, they take the lasting damage consequence indicated by the location of the hit.

Finally, when a PC is damaged and brought to 0 HP or below an Ace is given to the player, the location of hit is determined, and they make a saving throw versus death or suffer the listed consequence for that hit location. They also lose 1HP per round while that Ace is in their possession unless they are stabilized by an ally. When they reach -CON in HP they are dead.

Breaking the HP totals down into increments of 4 allows this all to be done easily, as the 3/4 - 1/2 - 1/4 totals are easy to calculate. It also helps with the luck mechanic.

Bhakashal has three options for a luck mechanic. Some prefer to play without any modification of results, some want something more aggressive. The three options give increasing levels of aid to the PC.

This is the standard AD&D option, your HP are your “passive” luck points. You don’t have to allocate or decide how or when to spend them, they are automatically deducted when you take damage.

In Bhakashal, you can “spend” up to 1/4 of your total HP to change the results of dice rolls. Let’s take an example from the table, a 4th level seer has 16 HP, so 4 of those can be spent to alter die rolls. So say the seer is fireballed by a warlock. The seer’s saving throw is a 15. Let’s say they roll a 13, they could “spend” 2 hp and make the save, dividing their damage in half.

Note that these HP can be spent at any time, as long as the PC has HP left. To narrate the spending of HP the ref can describe it as effort, pushing to avoid the blow/attack so hard that it is physically draining.

Bhakashal’s third option allows a PC to re-roll ½ their level (rounding up) in dice rolls per adventuring day, but every time they do so they lose 4 HP. This is no guarantee of a success, however, as it is a reroll it means that you could change a result that was too large to change with option 2.

One possible rule to go with option 1 or 2 is that you can share your PC’s  “luck”, either a daily reroll slot and it’s HP cost, or some of your “luck” HP, with another PC.

Of course, Monsters and NPCs also take part in whatever rule you choose. However, if you leave the decision up to the ref on when to alter their rolls it might seem unfair to the players. I also worry about my biases, I want to run an impartial game. So for me, it is always a roll to decided about this sort of thing, that way I know that the process is impartial.

For Bhakashal I recommend that you randomize this in some way, to your taste, eg

A.Roll a d4, the result is the point at which the NPC / Monster starts to modify failed rolls with luck:

C.Use luck on failed rolls when below ½ HP.

D. Use luck on failed rolls after the first morale check

There are always costs to design decisions. The cost of having an active luck mechanic is that it can allow the PCs to escape the consequences of their actions too often. And it takes away the sting of a bad roll, which makes a good roll less sweet.

So for some groups Option 1 is the best solution.

The cost of the “system of 4’s” for HP is that you miss out on variable HP and super high or super low HP PCs, it’s a bit disconcerting to have your HP capped, and to remove the possibility of a big roll.  I pondered this for a while and recalled how many people do something to boost HP, particularly at low levels.

I’ve playtested this at three separate tables, we still have character deaths as re-rolls can fail, and HP can be too few to change the roll sufficiently, or luck can be all spent when the real problem shows up. The key is keeping the amounts small, Bhakashal's "system of 4s" HP claw back the bloat signficantly, making the Option 2 and 3 luck mechanics feasible. With this system the frequency of changing rolls is about right. And of course the ref gets to change rolls too.

What I’ve seen is that most players save their active luck for emergencies, some use it right away or on a whim. It has impacted player satisfaction with the game, but it hasn’t taken away the challenge.

Between this and the Talislanta style player defined critical system, Bhakashal combat is kicking ass.

Building Bhakashal - Good Luck! I have mixed feelings about luck mechanics in D&D. On one level I don’t like them, there is something ...