Race, Colonialism and Dungeons and Dragons - A Story in Two Parts 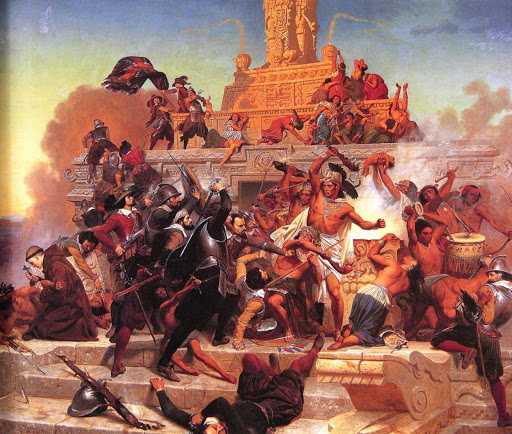 I'd say that about 90% of what I blog about is more or less directly game related. Occasionally though, I branch out, when an orthogonal topic touches on an area that I know something about. I'm a historian by training and profession, so sometimes the D&D discourse traverses into areas where I spend my professional time.

A few weeks ago on Twitter I got into a discussion with someone about the degree to which critics of D&D felt that it was irredeemable. Specifically, given that claims of colonialism and racism have been levelled against the game, is it possible to separate those features from the game and still have something that is recognizably D&D?

I wasn’t interested in whether or not people believed that those themes were actually there, I was curious to know, *for those who feel that they are there*, could they be separated or not? The poll pulled in almost 1800 responses, far beyond what I expected, and almost half, so nearly 900 respondents, voted that these themes cannot be separated from the game.

I find this shocking.

D&D is a game that has, from its inception, been “house ruled” by those who play it, indeed, the proliferation of variations on D&D are almost comical, there are over 100 retroclones of D&D available, 5 official editions, and many imitators. To say that colonialism and racism are “baked in” to the game and can’t be removed goes against the very grain of how it has always been used.

Or at least it seems so to me.

But put that aside for a moment, that’s for part 2 of this post.

There were a few complaints about the poll, it was “disingenuous” as it didn’t offer a “D&D doesn’t have these themes” option. I didn’t put one in as I know that there are people who think D&D doesn’t have these themes, I was interested in knowing how many people thought these themes were baked in and couldn’t be removed. I am well aware that many people deny the idea. I wasn’t interested in what those people think about the separability claim, as they don’t think the themes are even there. It seems obvious to me that there is no need for a poll option about this as the poll was about separability, not the existence of the feature.

But next time I will include a “I don’t think X is true” option so people don’t feel left out.

What I wanted to do here, before tackling the question of colonialism in D&D again, was to look at the concept a bit more closely. Over the last few weeks I’ve seen a lot of people making claims about colonialism. As it happens, I have some knowledge of this concept, so they interested me:

2. People are making up definitions of colonialism

3. Colonialism is people who believe themselves to be morally superior telling others what to think and say

4. The people criticizing D&D for colonialism are the real colonizers

5. Colonialism is NOT about “killing people and taking their stuff”

6. Critics of D&D forget that colonization happened before the Europeans did it

I wanted to address all of these claims, made in tweets, DMs and blogs/social media posts.

I agree with number 2, people are making up definitions of what colonialism is, or rather, they are focusing on one aspect or another while ignoring the bigger context.

Take 3, yes, *one branch* of critical theory holds that *one part* of colonialism is the control of language and ideas, using the belief in the inherent superiority of one group over another to shape social understanding of social institutions, laws, etc. So yes, a colonialist power will control institutions, ideas and education to reinforce those concepts of superiority and inferiority. So too will media, and literature, and art, and all parts of society, intentionally and unintentionally.

Colonialism, however, is far, far more than that.

But before we get to that, why would anyone use so narrow a definition of colonialism?

Well, those who are concerned about the hobby being destroyed think that “SJW’s” are taking over and trying to control what you think. Since many feel that’s what is happening in the broader culture and the hobby, they are redefining colonialism to mean that. That way they can accuse others of doing what those others are accusing D&D to be doing, which in social media terms, is a “burn”. That explains all the “the people criticizing D&D about colonialism are the real colonizers” stuff in 4. It’s a classic technique to deflect criticism.

Unfortunately, it doesn’t work that way.

You don’t just get to select which aspect of a technical term applies and which does not. That is decided by scholarly consensus. Colonialism doesn’t mean what you want it to mean, it means what the community of scholars who use the term say it means. Or at least that’s a great starting point if you want to have a conversation that can draw on the evidence and scholarly research built on the established, agreed upon definitions.

And if you read that scholarship, and I have read much, “killing people and taking their stuff” is a core part of colonialism. Here a definition would be useful, and rather than going with my gut, or to Wikipedia, I refer here to the Stanford Encyclopedia of Philosophy (if terms are being defined, sources are mandatory, scholarly sources are preferred)

The colonization of the “new world” by European powers is the single largest shift of population and wealth in human history, full stop. People were killed in the millions, indigenous populations were almost completely wiped out (they estimate that 95% of the pre-contact populations of Central and South America were wiped out by European colonizers). So, “killing people” was central to colonialism. Subjugation and political control involves violence, it always has. Permanent settlers displaced local populations, usually with violence involved/ To suggest that colonialism isn’t about killing is completely opposite to what every scholarly source has to say on the subject.

European nations also took over land on an unprecedented scale. Europe was pushing up against its agricultural limits in the Early Modern Period, and although the “New World” was an accidental discovery while looking for alternate trade routes to Asia, once discovered, land acquisition for both production of natural resources and eventually the creation of new consumer demand for the industrial production of Europe was a key factor in North American colonization (it was also a key factor in the colonization of India).

Even a cursory read of an introductory textbook on colonialism would tell you that one of its primary motivations was economic, appropriation and control of the resources of other peoples for the benefits of the home country. Every instance of European colonialism was about wealth acquisition, whether in the form of natural resources, people or land.

In other words, “taking their stuff”.

Interestingly, I don’t think D&D is primarily about killing things and taking their stuff, I think that’s a misunderstanding of the game. But rather than focusing on that people are arguing that colonialism somehow isn’t about wealth acquisition when any meaningful definition of the term says it is. So that’s a hard no from me. If you are going to start accusing people of not knowing what a term means, you don’t get to make up your own.

That brings me to claim 6. The claim critics of D&D don’t know what they are talking about as there was colonialism before Europeans started taking over the world! This is of course true, there were expansionist powers long before Europe sailed across the ocean, there was also slavery and war. None of that was new. However, historians usually distinguish between older forms of colonialism and European colonialism. Again, from the Stanford Encyclopedia.

The reason European colonialism is treated differently is that it was substantively different, it allowed far distant nations to control colonies, extract resources, and create huge new markets for the output of their production. It is no coincidence that capitalism emerged around the same time as colonialism (and that the Industrial Revolution followed soon after), they emerged together and had a reciprocal relationship. This marriage of capitalism, technology and colonialist ambition is one of the key markers of modernism, one of the reasons why modern colonialism is treated differently from that of the past, that’s World History 101.

So, in short, this critic of D&D knows what colonialism means, if people want to define it differently, LIKE THOSE POSTMODERNISTS DO, then he they are welcome to do so, but that doesn’t change what it is generally known to mean.

Now, just to finish up, I want to clarify something. I’m a historian by training and profession, so I find it particularly vexing when people talk about historical concepts and ideas but clearly haven’t read what any historians have to say about the subject. It pains me. There isn’t a single living or dead historian who would define colonialism as narrowly as 3.

I don’t mind when people say, “colonialism is X” if they are just speaking colloquially, that’s fine. You can talk about an idea with a rough concept and use that to have a discussion.

But to suggest that some other group of people don’t understand  what X means when you haven’t bothered to see what experts in the field say X means, well that just steams my greens. If you want to play the language police ("you don't even know what X means") then you better know what you are talking about. Colonialism is about a lot of things, securing natural resources, creation of new agricultural land, creation of colonial markets to purchase produces manufactured in the home country, military power, cultural dominance, believed superiority, but it is CERTAINLY about killing (all instances of colonialism involve killing) and about taking stuff (all instances of colonialism involved wealth acquisition).

So before I explore colonialism in D&D a bit further, I want to be clear about these things, colonialism has political, economic, religious, race and gender dimensions, and modern, European colonialism is different than colonialism in the past. Also, we currently still see the structural consequences of European colonialism all around us, it’s institutions and ideas have not disappeared, and are manifested physically in things like the prison industrial complex in the US and globally in the existing trade and capital networks. We are only partially in a postcolonial world, something institutionalized to such a degree and reinforced with the twin pillars of capitalism and science is not so easily dislodged.

Part 2 of this blog post will look at the question of whether D&D is colonialist or not, and the answer is, perhaps surprisingly, yes and no. I don’t think that D&D is primarily a game of killing things and taking their stuff. I think this is a fundamental misunderstanding of the game as it is designed. But there are colonialist elements in the game, mainly around race related issues. In short, D&D replicates the literature that inspired it in its use of the clash between the “civilized” and “barbaric” world. This was a key component in colonialism, so a source of the connection. I think these elements are easily excised, or can be contextualized in individual games in ways that make them unproblematic.

But that’s part 2, for this part I will stress that you can quite easily go out and independently verify everything I have said here about colonialism, it’s all there if you want to find it. I would also recommend that you exercise caution when people on Twitter tell you what something means.