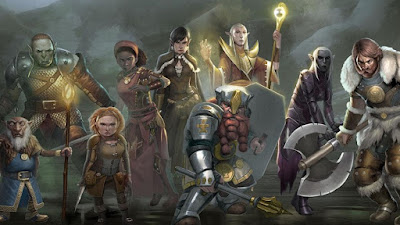 Over the last year or two I have informally absorbed a lot of details about current TTRPG trends and practices, Twitter is, of course, not a fully representative medium, but it does manage to distill a lot of things in plain view. I have also had more D&D related conversations with people in real life this past year than ever before, and what I’m seeing on Twitter is matching what I hear from those I speak to about D&D.

The most obvious example of what I’m thinking about here can be found in dozens of Twitter threads where people gush about their characters, I’ve seen people talk about:

Their character’s relationships with other PCs or NPCs

Minute and numerous details about their character’s appearance, habits, etc.

That sort of stuff.

There is a degree of investment in characters that is fairly intense. It is clear that these people are thinking about their characters… a lot. Creating details to flesh them out and make them “real” to the players.

“Backstory” is a thing. I have seen endless Twitter threads talking about it, sharing examples, discussing how to use backstory in the game to create player buy-in and interest, and threads where new players express anxiety and stress over “getting the backstory right”, or “not having any idea what sort of backstory my PC would have”.

Now, just to be crystal clear, THERE IS NOTHING WRONG WITH INVESTING IN A PC IN THIS WAY. It’s perfectly fine to play D&D this way, and it clearly resonates with a lot of people.

And of course, that makes sense, role-playing has some powerful impacts on people, assuming the role of a character can be transformative, or at least self-revealing, there is a reason psychiatrists use role-play to build empathy and understanding of self and others. When you roll to hit, when you are talking in character, when your PC almost dies, these things create a strange, gestalt experience where your PCs actions feel like your own.

It’s a kind of magic, and something to be treasured.

However, there is a shift in perspective here that is worth noting.

For many years TTRPGs like D&D were played in such a way that you didn’t have elaborate backstories as sort of the default. That doesn’t mean they didn’t happen, over the last 40 years I have gamed with a number of people who came to the table with multi-page backstories in tow. But it wasn’t thought of as necessary, and there were a large number of people who simply didn’t bother at all.

So this isn’t entirely new, but the focus has certainly shifted.

What is the shift? Backstories are not new. Using them to inform the direction of the adventure is not new. Getting interested in the “fluff” of a PC (their favorite food, songs, etc.) isn’t new either.

I think there are two primary changes between now and “BITD”

First, the frequency and scope of this has changed significantly, more people do it, and they are doing more of it. When I was speaking with a friend of mine who runs weekly 5e games he told me that all of his players had backstories for their PCs, and all of them were big, not two sentence summaries like I used to see BITD, but multi-page, elaborate discussions with enough detail to significantly flesh out their PCs.

I think this is far more common today than it was in the past.

The other big difference, and I think the important one, is the focus of the game, on the character or on the player.

In old school games, the PC is your avatar, your “skin” if you like, but the DM is not challenging your character, they are challenging YOU.

Yes, you do things as your PC that you couldn’t and wouldn’t do as a person, and yes, to a degree you “become” your PC when you play. But the point of old school systems is to challenge THE PLAYER through the PC. The PC is YOU, but you filtered through the lens of a fantasy setting.

The reason for this is simple, D&D is primarily a game, the game challenges the PLAYER with a dangerous and exciting environment and if they succeed their PC will survive and amass wealth and power. The game is primarily player focused, not character focused.

This has a number of well known knock-on effects, so in old school games you are told not to get too invested in your PC until they have been around for a few levels, you are less likely to lean on rolls and instead expected to describe what your PC was doing in order to test the player’s decisions, not the PCs stats, the encounters are not balanced as it isn’t expected that the PCs will automatically survive encounters. The almost endless stream of discussion about CR ratings and how they are to be used to help to ensure that encounters are “fair” and “balanced” is a great example of this. Balance is an artifact of catering to the PCs, not the players, as it relies on judging the PCs abilities and competencies to determine if they can survive, not the player’s skill.

The focus today seems to have shifted significantly, from player to character.

There are probably some meta-reasons for this that are cultural and beyond the scope of what I’m discussing here. Perhaps it’s the increased focus on identity politics in our current culture, since we are very interested in how identity shapes so many aspects of our lives, it makes sense to be focused on fleshing out character identities.

Perhaps it’s the increasing influence of ‘narrative’ elements on gaming, with the shift to treating D&D as “storytelling” and the rise of more narrative mechanics in newer games, this may simply be the result of players absorbing that shift and expressing it through their characters.

I’m sure there are other possible explanations.

In old school games, your actions at the table become your backstory, and you discover your character as you play. Rather than put the process of discovering your character into the phase before you start playing, that process is shifted to the table, so you discover your PC through their actions and the reaction of the game world to their actions.

Of course, players with backstories can do this as well, but the larger the backstory, the more involved and deep it is, the more constraints it puts on how the character will be played. Yes, an elaborate backstory can also inspire role play and exciting adventures, it isn’t necessarily a straight jacket on how the character is played. But it does change the tone.

As just one example, players in my games sometimes say, “but what would my character do?” when presented with challenging situations, but most often they say, “what should I do?”, because the focus is on them, not their PCs.  I find that the more backstory focused a player is, the more likely they are to want to know what their character would do in situations like these.

I don’t think there are any big lessons to be learned here, the only real potential negative aspects of elaborate character backstories and focusing on the character rather than the player that I have seen are the anxiety associated with creating these backstories and the trauma and emotional damage done by character death.

I have witnessed the former on Twitter and first hand. There are regular threads on Twitter where new players express concern over their backstories, or even ask if they are going to be able to play properly without an elaborate backstory for their PC. We added a new player to one of my after school games recently, and when she arrived at the first session she was very awkward and uncomfortable. After the session we talked and I asked what had made the session difficult, her response was that she hadn't’ been able to come up with a good backstory for her PC so she was embarrassed and concerned that the other players wouldn’t like her PC. It’s bad enough to have performance anxiety during the game, but this player arrived expecting the worst because she hadn’t prepared a multi-page backstory beforehand. Clearly the expectations are shifting, as I didn’t ask for a backstory at all, and none of the players who were in the game had one either.

With respect to character death, yes, “old school” gamers can get invested in their PCs, that isn’t new at all. But it has been noted that the most current version of D&D softens up PC death considerably, and I don’t think this is a coincidence. If you show up to the table with an elaborate, lovingly crafted backstory that draws on the lore of the game world and creates a vibrant, fleshed out character that feels “real”, it’s not a huge surprise that you might have some problems when your PC dies in the second session.

And I’ve seen this too. People posting on Twitter about depression associated with a character death, or people tsk tsking DMs who “needlessly kill off PCs” because of the traumatic effect that can have. I’ve even seen it bandied about that you should get permission from your players before their PCs can die in game. There could be any number of reasons for this last piece of advice, but I can’t help but think it’s connected to the fact that the game is character focused and the players have invested so much in developing the character that character death is a problem.

At the end of the day I think it's important to be up front with your players about what is expected in the game, and to embrace player investment no matter what form it takes. So if a player wants a big backstory then they should have one! Never miss an opportunity to get players to buy-in to the game. But it is also important to be clear about what this shift in focus will mean at the table.

Character Investment in D&D   Over the last year or two I have informally absorbed a lot of details about current TTRPG trends and pract...