Expanding Domain and Faction Play in Advanced Dungeons and Dragons. 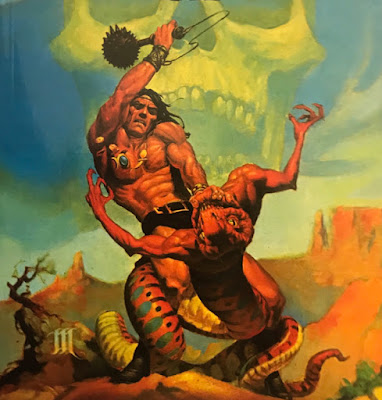 So we had another session in my new campaign world of Xiombal tonight. We were having so much fun we lost track of time and went over.  A few of the highlights

This campaign is focused on domain play. Rather than getting to high level and securing a domain, they have joined an expanding Fort settlement in a distant dinosaur and giant animal filled jungle. The angle here is that they are part of the settlement, hired to protect it along with the soldiers. So this is domain play where they play members of the fort, not the leaders

They can choose to work with the sorcerer who runs the fort, Maegar the Mighty, and the commander of the Fort’s soldiers, a lizard folk slayer named Uraku. They can align against them, or work with one against the other, or align with any other factions within or outside of the Fort.

I’m tracking their status with the various factions at the fort and elsewhere. For example, they killed a vodyani, an underwater umber hulk that had been killing fishermen as Maegar hadn’t prioritized it. So they now know the fishermen are unhappy with Maegar and the fishermen now like the party for dealing with it. The fishermen are an important group at the fort as they provide food so the other crops can be traded and sold

Also, the fort soldiers had claimed that bandits were stirring up local dinosaurs to attack the fort. Uraku had doubted them, the party convinced Uraku to investigate, and they routed the bandits in the last session.

Then they hunted down the Sorcerer Morgalath, who led the bandits, he bargained for his life and in exchange for his chest with his items and information he was set free.

The Shakarn family led by the regis Vissa Mahr, located in the city state Raet, paid the bandits. This is explosive news, as the official position of the Lizard folk city states is that they are indifferent to human and aarakocra expansion into the continent.

Secondly, they found out that there was a cult of psionic acolytes in the deep jungles around Fort Maegar that worshipped the “insane gods” (read Cthulhu gods, the gods of chaos).

These were two pieces of important information, gaining them gave them power and prestige, which matters more in this game and will translate to encounter reaction bonuses with some people and penalties with others

Then they had Morgalath’s chest. The party aarakocra thief looked for traps and found them. In this case there was a sigil on the chest. He recognized it as a magical ward but not what kind.

Sorcerers in Xiombal are sages, this was outside the party sorcerer’s  fields but he still had a 19% chance to know the sigil, he rolled 15 so I told him it was explosive runes. So they came up with a plan. The party thief would try to disarm it, neutralizing the magic of the ward, the party disciple ( a home brew class, a monk/cleric/druid combination) would cast resist fire on the thief first. The thief used his cold iron tools to try and disrupt the sigil.

IMC if you set off an explosive rune it explodes outwards and destroys what it was written on, so I’d you put it on a chest the chest is destroyed but the contents are left behind. This prevents hack thieves from destroying their items. In a neat twist, the spell is guaranteed to do a min of 11 hp damage, save for half, which will slay any 0-level, only a classed PC stands a chance at survival.

Two scroll spells (Pro from Normal Missiles and a homebrew spell called Entir’s Eminent Elevation that elevates targets into the air where they hang helpless then drops them for minor damage (used on the party last week). There were 3 platinum bars... and a crystal ball.

This is an information and faction play game, and now the party sorcerer can spy on anyone he meets for a short period of time. It’s a game changing item and it will make him both powerful and a potential target.

They returned to the Fort and chose to share their intel about the Regis family and the cult with  Maegar, but not the crystal ball. Uraku knows about it but didn’t share with Maegar either. So they learned of a fissure there as well. They then discussed next steps.

Maegar wanted to send a diplomatic and trade delegation to a nearby Settlement, Neirpal.

He wanted them to do some information gathering, to see if Neirpal, an aarakocra settlement, was also being targeted, or perhaps the Regis was supporting the aarakocra settlements. They would take goods to trade and try to forge an alliance or at least a mutual non aggression pact, and do some snooping or deal making. Option B was to go North to investigate the potential lair of a sorcerer. They had found hybrid monsters in the woods, and hybrid monsters are made by sorcerers. Their hunters had seen lights and suspected a sorcerer lived on a nearby escarpment. So the party went to get him instead, the trade mission would wait

They took a two day trip with wandering monster rolls but none came up. They arrived at a bend in the river near the escarpment. The hunters claimed that lights appeared when a man crossed the river here. They fled immediately but swore they saw a glowing figure coming from the escarpment.

So the party arrived and one of them crossed the river. They figured this tripped an alarm and the sorcerer appeared. Instead they brought out a ghost, the ghost was a warrior who drowned in this river after being turned over by his comrades to buy their freedom from the forest cult. He escaped after their torture and was hunted down and psi blasted into paralysis when crossing the river, where he drowned. He is back as a ghost. If they try to talk with him he will tell them to help him slay the cultists, if they do not he will slay them in his blind fury. So the ghost appears, a glowing, smoking crimson apparition of a warrior.

They all roll saves, the party Mercenary (fighter) and thief age 10 years and flee in terror. They also change stats from the aging. That scared them a bit.

They do not speak with it so it dives in to attack the PC who crossed the river, screaming as it dives. The player then says he jumps in the river. Since this is where the ghost drowned, I rolled to see if he would go in the water after the PC. It came up “no”, and the PC ( a mercenary/slayer multi-class, the slayer is a assassin / ranger custom class) was safe. Blind luck, but it worked!

Now, I have home brewed casting rules for the sorcerer so they can cast higher level spells than usual for their level from memory. But ALL spells, level appropriate or not, have failure odds based on intelligence + caster level, and harm odds based on spell level.  His casting odds are 78% (he’s third level with a 17 INT), the last 6 sessions the sorcerer has cast all of his spells successfully.

This time he cast Tenser’s Transformation. He failed the casting, the first failure of the campaign for him. Then he had to roll to see if the failure was harmful. As a 6th level spell there was a [30% chance - the caster’s level] of harm. He rolled a 20.

So the spell had a harmful effect. I decided he was transformed as the spell describes but he would go into an uncontrolled rage and attack anyone nearby.

So the party disciple asked what would happen if they cast a protection from evil spell on the ghost possessed PC. If pro from evil hedges ghosts, would casting it on a PC possessed by a ghost’s magic jar to be pushed out.

I made an on the spot ruling to treat pro from evil like dispel magic, base 50% chance -5% per level difference between the ghost (it’s HD - 10) and the caster (3rd). So there was a - 35% modifier, for a 15% chance. She cast it but failed the roll so the ghost wasn’t expelled. It then attacked the disciple but couldn’t hit her because of her protection from evil.

That enraged the ghost further!

So the situation was:
1. Two party members, one flying and one running, had aged 10 years and fled in terror
2. One PC was possessed by a ghost that can age them when it hits them
3. One PC is mad with rage and attacking all people nearby while under a Tenser’s transformation spell.
4. Another PC hides beneath the river.

We were a half hour over time at that point so we stopped. The next session, this Friday, should be eventful!

I’m loving how factions and domain play are shaping this campaign. Information is power, and they are plotting, making alliances and exploring both the game world and the new classes and magic system.

Warlock's at Play Finished up our summer camp today. Yesterday we finished when the party was hit by a fireball. Nothing gets your atten... 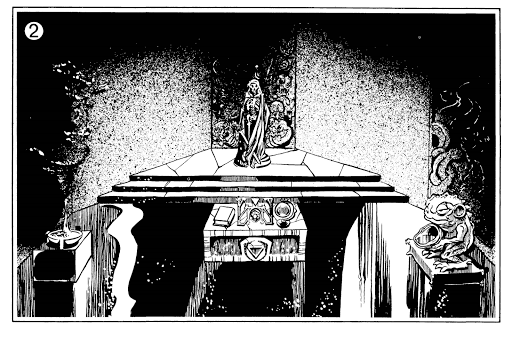