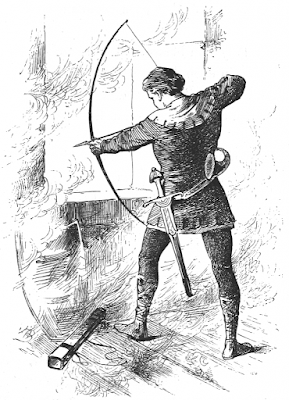 I thought it would be fun to give an example of how AD&D works at the table with respect to how the PCs interface with the game environment, and how adjudication impacts that process. A recent session of mine brought these things to mind. D&D has a referee, most games do not, which means that the role of the referee is worth exploring in a bit more detail, as they are one of the most unique components of the game. Also, as "rulings" are pretty much all improvised, there is an immense amount of room to learn from others here. Here was the scenario.
The party arrived at the tower of warlock Ghon Mord this week, their task was to find and remove a merchant Ghon was hiding, the merchant was faking his death to frame the party's employer, Kamerli the Ivory. The party had approached the tower before and knew there were at least 2-3 warlocks in the house, plus potential guards and monsters.
So there was a discussion of big or small group, stealth or aggression, deception, they considered using a distraction (pyrotechnics spell) to lure out at least some of the tower’s warlocks, or staging a fight. They asked me some questions and used their spyglass to watch the tower for a time.
They didn’t see any guards other than the 20’ tall giant made of skeletons (a dormeon) that stood outside the main gate. The last session they had encountered it’s slow effect (30’ radius sphere) and knew to go around it to a side or back wall for access to the tower They decided a small team would break in and break out the merchant: the party thief, Jaal the Blue, and the party priest, Kallas Ionnu, under a silence spell. Jaal can climb, Kallas is heavily armored. But Jaal has a reduce spell on a scroll, and can shrink Kallas to action figure size 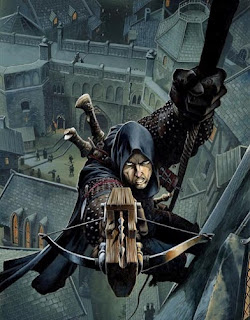 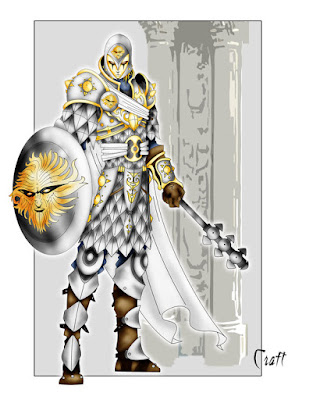 Jaal the Blue and Kallas Ionnu
Then the discussion, how to get to the tower? Jaal had an invisibility spell, but there were tons of questions, how long does an invisibility spell last, would Kallas be invisible if he was put in Jaal’s pocket (the ref said “yes”)... The rest of the party agrees to wait in the woods
How to break in? Jaal can climb the walls of the tower, but do any of the windows have locks he can pick? Or are they all built in? I decide there is a 1 in 4 chance that the warlock would have built in windows that could be opened but locked, all other windows would be barred permanently
I rolled the 1, so they look at the tower with the spyglass and see that the windows on the 4th floor have locks, indicating they can be opened. They are still barred windows, but the bars are part of a frame, and that frame can be unlocked and opened.
Jaal casts reduce on Kallas, places him in a pocket and casts invisibility on himself, then he sprints to the tower. He has to jump the 10’ moat, Unearthed Arcana has long jumping stats for the thief acrobat, I check those to calibrate and a 10’ jump is hard but not super-hard
I decide it requires a successful saving throw versus breath weapon to leap the distance, and he is successful, landing at the base of the wall. The window of interest is on the 4th floor, the bottom edge of the window where the sill is located about 34’ off the ground.
Jaal climbs at 12’ per round, so in round 3 he will reach the sill. He starts to climb, he climbs 12’ and rolls his CW percentage successfully. He climbs the next 12’ and is successful again. Now he climbs the last portion of the wall, he rolls a failed CW check and starts to fall.
The player asks if he is close enough to grab one of the bars on the window to stop from falling. I decided that since he failed on the 3rd check, he was somewhere in his 12’ when he slipped, I rolled a 12 sided dice, I got an 11 so he was at 35’ when he slipped,
I decided that he could roll a breath weapon save (my go to dodge / reaction save) to grab one of the bars, otherwise he would fall 30’ and take 3d6 damage, and Kallas could as well depending on how they land. He made the save.
Pulling himself up to the ledge he then looks in the window. I roll to see if anyone inside happens to be looking out that window when he pulls up. They get lucky, there is no one there.  He then takes out his dagger and looks around the edge of the window for trip latches or wires that would indicate a trap of some sort. He takes out his hammer to tap the stone around the window gently, listening for hollowness that might indicate trap mechanisms. He rolls for find traps and is successful, I interpret this as the hammer finding a “hollow” section, he uses his dagger and pulls back against a stone and sees the switch inside, when the bars are raised the switch is no longer held back and will open, triggering a trap. He then takes a shiv of metal and slips it down (rolls to remove traps successfully), barring the switch from moving. Now he rolls to unlock the window (which he did successfully). The window opened, the shiv kept the switch from tripping, and they slipped in to arrive on the 4th floor of the tower.
Now, Jaal still invisibile, he removes Kallas from his pocket and nullifies his spell,  increasing Kallas to full sized again. His silence spell is still in effect. They walk slowly forward and enter a door, Jaal going first. He walks through the door into the chamber beside room 3, Kallas follows him in. They see a writing desk, some books and a chair. 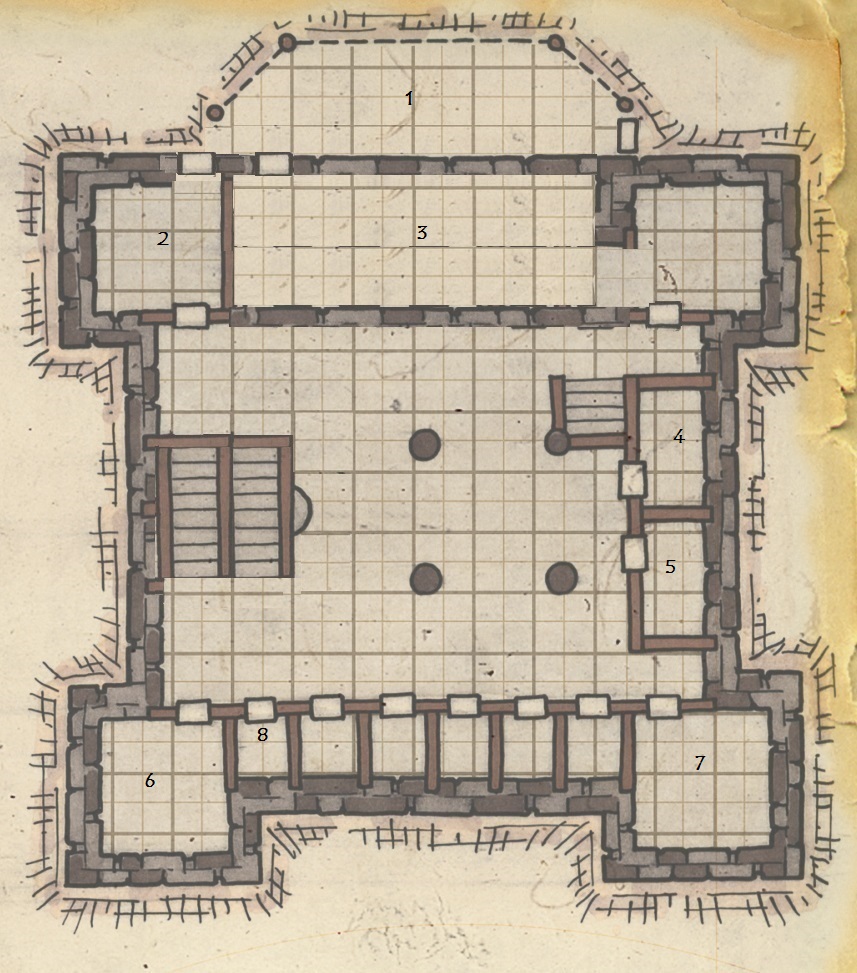 Liminal D&D One of my favorite things about AD&D is the “between adventure” time, when players can stretch their role play ...